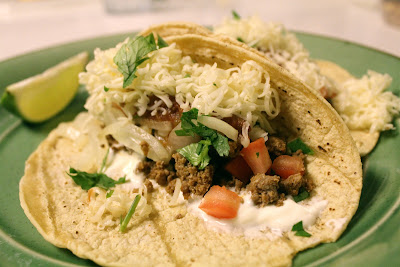 There are times when I just crave foods of the past - fried chicken, pizza or french fries. As my cravings come, I've found new ways to re-create my favorite "unhealthy" foods into a healthier version of itself - fried coconut chicken, egg or hamburger pizza and french bakes. One of my favorite foods are messy and flavorful tacos, which really in it's authentically hand-made Mexican version, isn't so bad. The fast-food and chain restaurant versions aren't much to be said for though. Here is my version of a healthier taco for the much desired taco night (inspired by the hand-made tacos we used to get in the back of a Mexican grocery store in Columbus, Ohio back in the days).

Pre-heat skillet, cook ground beef until cooked through. Add spices about half-way through and mix in well (spice it up good). After removing the meat from the skillet, quickly saute the onions in the flavors left from the ground beef. Warm up tortillas in the oven. Place tortillas on a serving plate and add beef, onions, tomatoes, salsa, cheese, fresh cilantro and finish off by squeezing fresh lime on top.

Other ingredients to change it up could include avocados, homemade guacamole, chicken (with same spices added) and peppers.